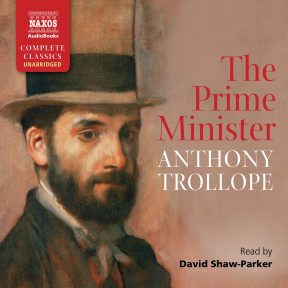 When the liberal government falls and neither party is able to form a cabinet, Plantagenet Palliser is called upon to lead a coalition government. He is reluctant at first, and displays none of the charisma of his predecessors, but eventually he grows into the role. However, his confidence is short-lived as he becomes embroiled in a scandal involving the villainous Ferdinand Lopez – unintentionally brought about by Lady Glencora Palliser. Pronounced ‘a beautiful book’ by Leo Tolstoy, The Prime Minister is a superb portrait of marriage and politics, and the compromises necessary for success in both. It is the fifth novel in Trollope’s Palliser series.

David Shaw-Parker is nearing the end of his marathon narration of Anthony Trollope’s Barchester and political novels; the same characters turn up in both series, so if you embark on and enjoy The Warden (recorded in 2013), you may find yourself following the 12 interwoven tales for well over 360 hours.

The release of The Prime Minister, the fifth of the six political novels, is amusingly timely: ‘There had come to be a deadlock in affairs, during which neither of the two old and well-recognised leaders of parties could command a sufficient following for the carrying on of the Government.’

Plantagenet Palliser, the titular prime minister, shares many traits with Theresa May: a deep love of his country, a sense of duty and an obstinate refusal to leave office despite the urgings of his ministers. He struggles to get pet schemes (in his case decimal coinage and reform of the parliamentary constituencies) adopted by the coalition he leads; he is cruelly assailed and disparaged by the press.

Shaw-Parker excels at changing character and sex, as lively as the irrepressible Lady Glencora as he is caddish as Ferdinand Lopez.

David Shaw-Parker’s usual exemplary narration brings all the inner torments of the characters in this classic novel to life. Trollope was one of the deep psychologists of the Victorian novel, and this is one of his most psychological works. Nearly all of the action is interior to the major characters. As we approach the end of the Palliser series, the parallel plots concern decisions: Should Emily Wharton marry the mostly unknown (and of dubious ethnic origin) Ferdinand Lopez, and should Plantagenet Palliser (now the Duke of Omnium) agree to head the British government? Shaw-Parker captures every detail of the effects of their decisions – on themselves and on those around them. Add his masterful command of accents, and it is hard to imagine a better audiobook.