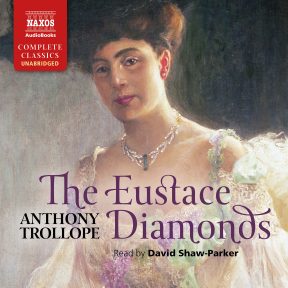 Before Sir Florian Eustace dies, he gives his beloved wife Lizzie a beautiful and expensive diamond necklace valued over £10,000. Dispute soon rages between the Eustace family and the manipulative and conniving Lizzie: it’s claimed that the diamonds are a precious family heirloom, but Lizzie argues they were a gift. Is she lying? As the family’s lawyer determines to reunite them with the jewels, Lizzie resorts to increasingly desperate measures, until one day the jewels are stolen. Who is responsible? The third novel in Trollope’s Palliser series, The Eustace Diamonds is a wonderfully absorbing blend of dark cynicism and humour.

In a field overrun with virtuous, sappy females, Lizzie Eustace stands out in Victorian literature for her sterling bad qualities: avarice, mendacity and seductive witchery. Only Becky Sharp can match her for simple, unadorned deviousness. Lizzie is the dark star of The Eustace Diamonds, glittering rival to the meek, faithful Lucy Morris. Though the novel is part of the Palliser series, it stands alone, and the familiar Palliser characters play only bit parts. The stage belongs to Lizzie and her doomed efforts to hang on to the £10,000 diamond necklace that was not exactly given to her by her late husband. She is also intent on marrying dreary Lord Fawn or, maybe, as the mood suits her, the fly-by-night Lord George de Bruce Carruthers or Frank Greystock, who is engaged to Lucy. There are already three decent unabridged recordings of this novel, but David Shaw-Parker’s rendition is a true masterpiece of narration. His unhurried delivery, impeccable pacing and rendition of the decorous rhythm of Victorian speech result in a recording that is more than three hours longer than the others. Beyond that, he unobtrusively conveys the personality of the various characters, including the manipulative Lizzie, irresolute Frank, ponderous Fawn, patient Lucy and, most gloriously, a fractious Scot, speaker of high-Caledonian argot.

In this third entry in his Palliser series, the tale of a manipulative woman and the fate of a diamond necklace, Trollope eschews politics for the most part in favour of delightful humour and sharp social commentary. Social climbing, avaricious, beautiful Lizzie Eustace has an aversion to the truth and a tendency to offer ‘an incorrect version of the facts’. When her new but elderly husband dies, she claims the fabulous family diamonds (valued at £10,000 – more than £1,000,000 today) are hers, gifted by her husband. Thus begins the battle with lawyers from the estate demanding the return of the necklace. In exquisitely plummy tones, Shaw-Parker regales listeners, and his extravagantly dramatic voice perfectly suits the melodrama. He makes the most of Trollope’s asides on the ways of the upper class and the gossipy reports from the large cast of secondary characters, who comment on action and players. Characters are not so much distinguished by pitch as by tone. Lizzie wheedles and fabricates; her suitor, the weak Lord Fawn, demonstrates his indecision in every speech; and the lawyer for the Eustace estate, Mr Camperdown, argues his case dramatically as he energetically fights for the diamonds. It’s a marvellous performance, and Shaw-Parker’s companionable reading and delightful characterisations make this story seem as plausible today as in the 1870s.

Narrator David Shaw-Parker continues his marvellous tour of Trollope with this audiobook from the Palliser novels. Although the Pallisers are minor characters in this volume, we do get Shaw-Parker’s memorable portrayal of the Duke of Omnium, as well as Lady Eustace’s almost-but-not-quite-incomprehensible rural Scottish steward, Andy Gowran. Without doing full impersonations, this narrator uses intonation and accents – and his accents are masterly – to distinguish and portray the characters. Trollope was a man of his time, so there is an unfortunate anti-Semitic undertone to the audiobook, but the main story is about women in Victorian England and how they deal with the limitations of their social roles. There are also some interesting resonances with Thackeray’s Vanity Fair.