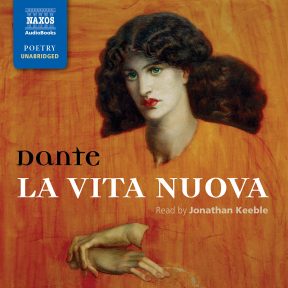 Written in alternating prose and poetry, La Vita Nuova (The New Life) is a profound reflection on the nature of love, devoted to Dante’s muse Beatrice. Following Beatrice’s death in 1290, Dante became obsessed with the young Florentine woman, whom he only ever knew from a distance. He believed his love for her was a form of divine love, and saw her as an image of salvation itself – a theme that is later explored in his masterpiece The Divine Comedy, where she guides him through heaven. La Vita Nuova gives a fascinating glimpse into the poet’s innermost feelings – his joy, his guilt and his grief – and remains one of the greatest works of Christian autobiography.

Imagine getting a lesson on the works of Dante from the poet himself. Jonathan Keeble narrates La Vita Nuova, a verse Dante wrote in 1295, like a poet who has been asked to explain his own work: with keen interest tempered by a bit of distance, so as not to get carried away. It is the story of Dante’s love for Beatrice, told through the various sonnets he wrote for her, as translated rather floridly by Dante Gabriel Rossetti in the 19th century. Keeble keeps Dante’s explanations of the sonnets clear and reasonably conversational, and those interested in life in late medieval Florence will find plenty of interesting nuggets (although, curiously, Dante is careful never to mention the name of the city).