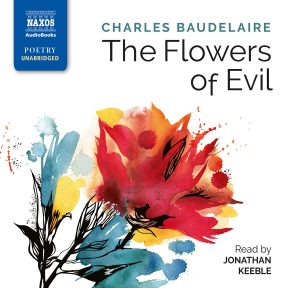 The Flowers of Evil

Sensual, macabre, joyous and liberating, The Flowers of Evil, or Les Fleurs du Mal, is a beautifully debauched reflection on dreams, sin, life and death. With subjects ranging from travel to drugs, sex to faith, sleep to contemplation, Baudelaire finds new beauty in the most sinister and corrupt of situations. His morbid and nightmarish Romanticism was completely unique: cynical and bleak, but also inspiring, lifted by magnificent imagery and melodious language. The book was highly controversial upon its release and Napoleon III’s government prosecuted Baudelaire for ‘an insult to public decency’; six of the poems were banned until as recently as 1949.

Titles by Charles Baudelaire
The Flowers of Evil (unabridged)

Mid-nineteenth-century poet and translator Baudelaire is one of the great progenitors of modern poetry. Jonathan Keeble’s excellent narration reminds us just how radical this work was and why parts of it were banned in France as late as 1949. Keeble restrains some of the passionate excesses that are part of Baudelaire’s radicalism, preserving the contrasts that let the heights of passion stand out. Passion can be low-key as well, and Keeble shows he understands that in the way he delivers a body of work ranging in subject from Satan to cats.

A masterpiece of nineteenth-century French poetry, Baudelaire’s scandalous The Flowers of Evil marked a turning point between romanticism and a more discordant modernism that was to come. In Keeble’s vivid and resonant reading, the collection fully retains its capacity to shock, and to move. With keen specificity, Keeble nimbly realises sudden tonal shifts that startle the listener, as in ‘The Mask’, which veers from refined aesthetic reverie to outrage, pathos, wonder, and, at last, a bitter existential despair, all in a mere 36 lines. His delivery ravished and pining, caustic and confrontational, seething and sensual, Keeble fully invests Baudelaire’s conflicting passions without ever dropping the thread of sense. The effect is further heightened by the tension between the elegant phrasing of James McGowan’s rhymed translation and the poet’s sometimes raw imagery, in which blossoms and stars alternate with maggoty corpses and creeping ennui. An excellent and essential recording that delivers the full disconcerting impact of this decadent landmark.