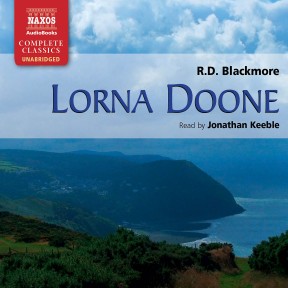 The Doones are a clan of murdering thieves, and among their victims is John Ridd’s father. The strong, noble Ridd determines to avenge his father’s death; but his plans are complicated when he falls in love with one of the hated family – the beautiful Lorna. Lorna is promised against her will to another; and that other will not let her go lightly. Set amid the political turmoils of the late 17th century, Lorna Doone brings West Country history and legends alive with wonderfully imaginative fiction. Brimming with vivid descriptions and cliff-hanging action, it is a true classic of romantic adventure.

First published in 1869, this great tale of well-born brigandage, yeoman valor and maiden peril set in Restoration England’s West Country, Devon and Somerset, gives full expression to mid-Victorian longing for a vanished agricultural past. Its audio form releases the language from the page thanks to Jonathan Keeble, an extraordinarily skilled voice actor who takes on the archaic Devon accent as though born to it – which, as a native of the region, he was. The novel’s quietly droll passages and paeans to nature are greatly enhanced by his country aplomb. Moreover, the dialect that snags the reader in print (‘Whoy, dudn’t ee knaw… as Jan Vry wur gane avore braxvass’) emerges here as fluid speech, its cadence a joy to hear.

Lorna Doone is the only work of its author, R.D. Blackmore, that has any kind of popularity; everything else he wrote is almost completely forgotten. That in itself is not so unusual, perhaps. Nor is the fact that the author did not care for the book as much as his readers did – that is a fate that almost every artist suffers at some time (Tchaikovsky hated The Nutcracker Suite). Many authors feel his or her greater skills in another medium have been unfairly neglected; there are plenty of storytellers whose first love was their poetry, for example. None of these alone would necessarily make Blackmore’s most famous work unusual; all of them together might not be so rare, even for a book of such enduring popularity. But when you add to all these the fact that this one book gave Blackmore the same stature as the likes of Stevenson, Hardy and Kipling, the latter two of whom were on the committee that erected a memorial to him in Exeter Cathedral, Lorna Doone starts to stand out. Blackmore was seen not solely as a popular writer of historical romances, but someone whose ability to link place and time in a fast-paced narrative made him the West Country equivalent of Walter Scott – and all because of Lorna Doone.

Blackmore felt as keenly as his supporters that he was of the place he described so hauntingly, saying that ‘In everything, except the accident of my birth I am a Devonian; my ancestry were all Devonians; my sympathies and feelings are all Devonian’. This was true, if slightly disingenuous, since he lived most of his life in Teddington, southwest London; but the emotional connection he felt for the place where he spent much of his childhood is unquestionably true. He was born Richard Doddridge Blackmore to a rector in what is now Oxfordshire, and after living with his aunt following his mother’s death, he returned to live with his remarried father in Devon. Here he went to school, where the environment, in Blundell’s School in particular, was fairly harsh. It was where his father had been educated, and it dealt in the type of Victorian education that gives punishment beatings a bad name. It may well have been typical of its time, and Blackmore does not seem to have complained of its severity, but others have suggested that the corporal punishment it meted out contributed to his later epilepsy. This is speculative, of course; but the harshness also reflected an element of the landscape where he felt so much at home. The Devon of his childhood was, if not actually lawless, certainly a favoured haunt of those who preferred that the law should leave them alone. Rugged, wild (Blackmore’s school was between Exmoor and Dartmoor) and an area legitimately famous for its smugglers, it was also full of legend and myth, as well as the hazy historicity that seems just as fanciful to the imaginative mind of a very lonely boy.

The Devon of his
childhood was,
if not actually
lawless, certainly
a favoured haunt
of those who
preferred that the
law should leave
them alone

As well as his imaginative streak, Blackmore also had academic talent. He was extremely successful at school, becoming head boy for two years, and went on to study classics at Oxford. He decided on a career in the law, a step away from what was almost a family tradition of serving in the clergy; and in another step away from what was expected of him, married, without telling his father, a Catholic called Lucy Maguire. The potential shock of her Catholicism to a family made up of Anglican vicars was mitigated somewhat by her later conversion, but there were no children. This is ascribed to a delicacy in Lucy’s constitution, but an element of Blackmore’s own may be just as significant. He had found it impossible to practise law because of his epilepsy, a condition thought at the time to be hereditary, and this could have affected their determination to raise a family. But this too is mere speculation. The couple liked children, though, and eventually adopted one of Lucy’s nieces.

Before that, however, Blackmore had to make a living. He began teaching, but never greatly liked it and gained much greater freedom when a substantial inheritance allowed him to buy 16 acres in Teddington, then a rural area well outside the bounds of London, in 1860. Here he built Gomer House (named apparently after a favourite pet) and was able to continue the writing that he had started some years earlier, and also establish a market garden – horticulture was one of his abiding delights – despite long and angry arguments with the railway company that was planning to build a station just opposite him. None of these was that successful: the railway company built its station, his garden never made money, and the writing was largely a failure, too.

His classical interests had led him to poetry and translations of Horace and Virgil under the pseudonym Melanter (Greek for ‘more black’); from there he moved to works in English and on contemporary themes. But it was his decision to write prose that – eventually – sparked the public interest. His first two novels failed to fire the public’s imagination, and even Lorna Doone was submitted to several publishers before one accepted it, and even then the first run (of just 500 in a three-volume set) failed to sell much over half. But it was later reprinted in a cheap, single volume; and this coincided with a huge society wedding involving the Queen’s daughter and the Marquis of Lorne. Blackmore was thought to have derived the name Lorna from the Marquis’s area of Scotland and as a result people wrongly associated the book’s title with the soon-to-be-married Marquis. In fact, the name had existed before then; but suddenly Blackmore was a huge success.

He never managed it again. He continued to write novels, but none of them even approached Lorna Doone for appeal. He had hit his perfect note just the once, combining his skill with and love of words with a story set in a landscape he knew and adored, and tinged with a sense of darkness that came from his lonely childhood. His own end was rather lonely too. Lucy died in 1888, and though he was looked after by two of Lucy’s nieces, the depredations of age took their long and dispiriting toll on Blackmore, and he died 12 years later after a long series of illnesses.